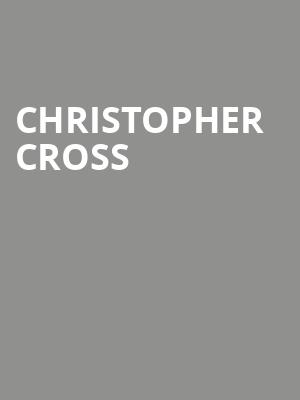 The King of Smooth pop, Christopher Cross takes to the road once more in 2020, celebrating 40 years since the release of his self-titled Grammy-winning debut album! Beating out Pink Floyd's The Wall for Album of the Year, the 1980 work also went on to score four more Grammys that year, including Song of the Year (for Sailing), Record of the Year (Sailing again) and Best New Artist - becoming the first artist in Grammy history to scoop the 'Big Four'.

A five-time multi-platinum, the career-defining album also includes Oscar-winning 'Arthur's Theme (The Best That You Can Do) from the 1981 film Arthur starring Dudley Moore and Liza Minnelli', 'Ride Like the Wind' and 'Say You'll Be Mine. Not one to rest on his diamond laurels, the adult contemporary superstar is clearly excited to bring the show to you, stating; "This tour celebrates the first chapter in what has been my life's journey. I look forward to seeing everyone on the road."

Sound good to you? Share this page on social media and let your friends know about Christopher Cross at Brown County Music Center.