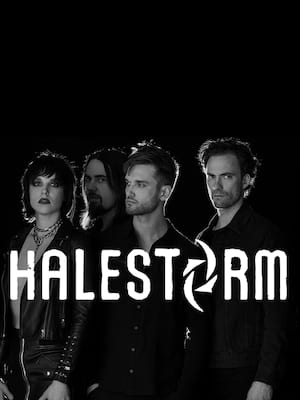 There are moments of showmanship via an elongated drum solo from brother Arejay Hale, and Lzzy Hale sometimes sings a cappella, allowing her voice to detonate as she shifts from almost Motown-esque melodic grace to gutsy, growling screams.

Halestorm are back on the road!

Following their triumphant Grammy Award nomination for Best Rock Performance (2019), hard-rocking Pennsylvanian quartet Halestorm are keeping up the momentum and hitting the American road. Awarded the accolade for their heavy-hitting lead single 'Uncomfortable' from their 2018 album 'Vicious', the band has honed their penchant for monster choruses, massive riffs and driving rhythms since their formation in 1999, culminating in their bombastic fourth studio offering.

Possessed of one of the most powerful voices in modern rock and roll, frontwoman Lzzy Hale shreds as powerfully as she sings. A veteran performer, Hale is charismatic and commanding, unleashing sonic thunder and demonstrating her jaw dropping vocal range on standout tracks 'Black Vultures', 'The Silence' and 'Love Bites (So Do I)', the latter of which won them their first Grammy. Combining shades of heavy metal, industrial rock and pop, Halestorm make no apologies for their singable, earth shaking anthems which empower the listener and elicit mass mosh-pit euphoria in equal measure.

I love Halestorm, have been a fan since day 1. Went to see them live... more

Sound good to you? Share this page on social media and let your friends know about Halestorm at Brown County Music Center.